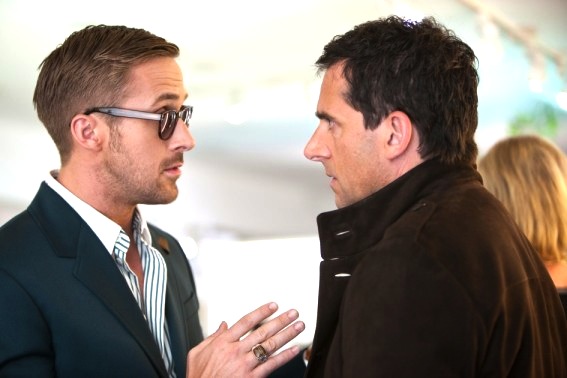 Well well well. In this week’s Summer Drive In series —my musings dedicated to exploring brilliant illustrations of emotional truths in movies and media we visit Crazy Stupid Love with its top cast of actors portraying the love seeking and lovelorn. Steve Carell plays Cal, a middle-aged husband to gorgeous Emily (Julianna Moore). Carell has dropped the husband ball hard on all of those things that keep romance alive (like LIKING ourselves, being in our empowered masculine or feminine, exuding some sex appeal which doesn’t really happen when we don’t like ourselves) and has otherwise become complacent, apathetic, inattentive and neglectful of his wife’s needs by extension of his own. So there’s that. Then wife Emily drops the bomb that she is having an affair with David Lindhagen (Kevin hilarious Bacon) her smarmy accountant colleague. Upon hearing this news Carell commits the ultimate act of expressed indifference and rolls out of their moving car rather than share his grief, fight for his beloved, or otherwise apply some attention to the problem. Do we understand that Cal loves his wife and wants to be married to her, yes, but it’s all self absorbed spiraling on the inside. There isn’t room for two.

In STRUTS our dazzling Gosling playing Jacob; metrosexual man about town who has wrapped the game on ‘how to have game’ and now needs a project. He spots sneaker wearing Cal crying in his beer and takes him on as a protégé of manhood, which is a recipe for ensuing shenanigans where the old dog gets to learn some new tricks. School takes place at stylish clothing stores and inside swanky bars where Cal gets a makeover and learns new manners, sort of like a Pretty Woman for bro’s. At first Cal is perpetually stricken and tripping over himself. We cry-laugh, but also we feel a burgeoning sense of empowerment right along with him when he learns how to buy a woman a drink and learns how not to engage her as a mother to his weepy inner child, or therapist to his retelling of woe, or her pity by introducing himself as a cuckold. I love a good transformation story and hell if you need some game but like your lessons served with a little less bravado and about five shy of a six pack call me up.

Then the story lifts a veil and we are introduced to after hours Jacob who is less shiny in the low light of closing time, wearied of his prowess. Could there more to it than the perfectly executed pick up??? We wonder we query we ponder. And in this low light less shiny moment of an evening with his pupil well on his way to suave and nothing and no one to celebrate with, he casts out his own lady luring net and wouldn’t you know it reels in Emma Stone as Hannah, sparkling with her beauty saturated lack of pretense like the jewel of the nightlife sea. Emma breaks his rules, and generally delights him with her amusement at his artifice. She sees through his exterior but also she likes something in there and well then we see it Friend. This is the moment. Dun dun. She has agreed to come home with him —quick backstory she is on the run from her date, who is ill matched and painted as pretty superficial and selfish —in her vulnerable state she allows Jacob to seduce her, breaking out into starry laughter when he invites her to try out the Dirty Dancing girl-runs-and-jumps-boy-catches-her move back at his place. This actually works for you? She is gob smacked and then they talk into the late hours and he shares with her that for all of his game, he is actually empty on the inside. Awww.

Yes. Of course he is. Because thunder only happens when it’s raining! You know the Fleetwood Mac song, and players only love you when they’re playing. That is why. PLAYING the thing that PLAYERS are so excellent at, is a surface deal. It’s all maneuver. It gives you, us the ones being played the illusion of empowered confidence and we dance a dance with that, or go home with it or date it for a while but it doesn’t let us in. Clients say to me all of the time what if I am just played and made a fool of, and I say first of all, you can’t be because players only play themselves. If they lock themselves down emotionally and lure you with false promises of true emotional intimacy and then they hide or lie and rinse and repeat you move on and find someone healthier and they are living out their shit, so how does that possibly make YOU the fool? You can’t live your life AVOIDING VULNERABILITY AND OPENNESS AND INTIMACY in order to outsmart those potential partners who are avoiding vulnerability and openness and intimacy. That is foolish, Friend, or as my mom would have said to me when I was eight years old and refused to eat at all because I wasn’t allowed to have a cookie before dinner, cutting off your nose to spite your face. Also, funny cool thing is that the better we get at emotional health and self insight the safer we feel at vulnerability and intimacy. The more ‘Emma Stone’ we will be, male or female or non-binary. In other words the less the game playing will affect or have any potential to hurt us and the more likely we will be to gently call it out. So next time you are worried about a player, don’t worry about youlooking bad for being healthy and trusting. THERE ARE NO PRIZES FOR BEATING THE PROVERBIAL BAD GUYS AT THEIR OWN GAME THAT DON’T ALSO REQUIRE YOU TO BECOME ONE. Worry about poor little Jacob, alone at home in his swanky digs crying as he crunches. 1001. 1002. By worry I mean this —if all we ever said to someone who was trying to withhold from us was Hey I am really sorry you felt you had to hide from me or be dishonest. I would have liked to have known the real you. Well damn.

And what about Cal? Well YES we need to love ourselves and find our own light and shine some of that back into the world around us. That makes us alive and it gives off sparks and it invites someone special into what is a special place. This may require sexy shoes instead of sneakers or it may require something a bit different than shoes. But a thousand shoes and abs for days won’t make our intimate inner world a sacred place to share, or even a safe one if it’s not.

Shoes, like abs should be an invitation to the Kingdom within where all the good stuff you are made of is there for the sharing, not a substitute or a way to keep them outside the gate.

Which is why Cal and Jacob are really two sides of the same coin and the way out for both of them requires some levelling up on the inside *cue one of the funniest reveal scenes of all times with fathers attacking each other to protect their daughters from men who behave just like them. Leading us all to ask ourselves AM I THE KIND OF PARTNER I WOULD WANT FOR MY KID?

Isn’t that the litmus test of all time?

We want a world where we don’t have to be afraid to love; where we know how to love with strength.

We want a better shot at this for ourselves and our children.

That’s the movement I’m at work on and I’d love you to join me.

When the rain washes you clean you’ll know(ummm that’s Fleetwood Mac again in case you are younger than me, or from space).

P.S. 2021 I am bringing on the love. I’ll be featured in a podcast all about better loving, from healing your broken heart to intentional dating to creating a relationship that thrives, and I’ll be launching a sister site for all of you relationship and love enthusiasts, with all kinds of insights and offerings. Stay tuned!

P.P.S. One of the kindest things you can do for me is to share my writing. If you enjoyed today’s Monday Musing and know someone else who would please forward it to a friend.

I took an unexpected hiatus from…

No images found!
Try some other hashtag or username